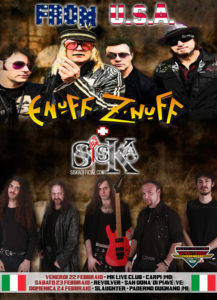 Enuff Z’nuff has continually recorded and toured throughout their career of more than 20 years, releasing 12 studio albums and a total of 19 CDs to date. The band’s first single, “Fingers On It,” received some minor recognition when it was featured in the 1986 cult movie Henry: Portrait of a Serial Killer. Their songs have been recorded by several other musicians, some of which include Paul Gilbert, The Wildhearts, and Nelson. The band has a cult fan-base around the world which includes radio personality Howard Stern.

——
SISKA
Siska is a hard rock band born in October, 2015.
The band was formed by Mattia Sisca the guitarist, who played as a supporting act for Blaze Bayley (Iron Maiden, he was lead guitarist for his tour too), Jennifer Batten (Michael Jackson), Dennis Stratton (Iron Maiden), Michael Angelo Batio and many others! He did shows across Europe and South America as a Headliner and supporting band with Lunar Explosion and International Artists.
The first video of the band “Sally”, has been shot for the first time by a rock band in the “Staglieno Cemetery” in Genova (IT). The location is a UNESCO’s world heritage site.
In september 2016 Siska starts the first tour of the Band in Brasil with Tim Ripper Owens (Judas Priest, Iced Earth, Malmsteen), playin’ succesful sold out shows and conquering the hearts of the rockers of the country. In this tour, Siska played in important venues where bands and artists like: EUROPE, VINCE NEIL (Motley Crue), MEGADETH, SKID ROW, members of GUNS N’ ROSES, members of KISS, EPICA, Firehouse, Richie Kotzen, Kip Winger, Danger Danger, Angra, Firehouse, Steve Morse, Michael Angelo Batio and many others played in the last years.
In may 2018 SISKA released two singles: “Nothing left to say” and “Waiting now”. At the same time SISKA were chosen by legendary SKID ROW to take part to their United World Rebellion tour across Europe.
On july 2018 the band will take part to Metalhead Meeting in Arenele Romane, Bucharest and play in front of thousands and thousands of people together with Children Of Bodom, Sonata Artica, Epica, Soulfly and many others.
On july 13th 2018 SISKA will release their first album “Romantic Dark and Violent” with Big Tuna Records\SONY. CDs and vinyls will be available in the best world music shops.
On july 2019 SISKA will perform at Metaldays Festival 2019 in Tolmin, Slovenia with Dream Theater, Tarja, Dimmu Borgir, Philip H. Anselmo, Demons & Wizards.